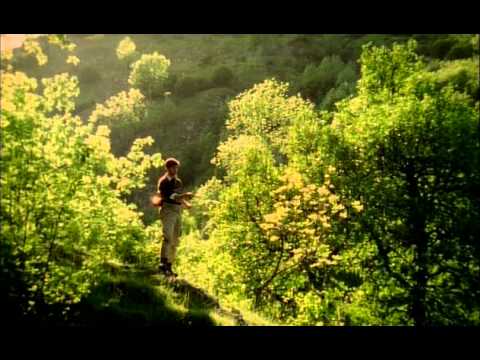 Documentary
Share on Facebook
Share on Twitter
Share on Pinterest
Share on LinkedIn
The Complete Angler is a film by James Prosek (artist/writer), Fritz Mitchell (producer/editor) and Peter Franchella (cinematographer). It documents Prosek’s travels as he walks in the footsteps of the 17th century English writer, Izaak Walton—”research” for his senior thesis at Yale. The film focuses on Walton’s book, The Compleat Angler, a book that many have heard of but few have actually read.

Chapter 1 – James leaves Connecticut for Ireland and England, catching a few trout in his home streams and musing about his youth, fishing, and some Waltonian ideals. He visits the library at Yale and examines a first edition of Walton’s Compleat Angler from 1653. Then he sits for a reading of Yeat’s poem, The Song of Wandering Aengus, by Harold Bloom.

Chapter 2 – James goes to Ireland to experience the earliest form of fly-fishing, dapping live mayflies impaled on fine-wire hooks for brown trout on the lakes of the Connemara region. He visits with a boy who collects and sells live mayflies to the fishermen, and salmon fishes along the Eriff River.

Chapter 3 – James fishes a tributary of the Thames in London that Walton fished three hundred and fifty years before, the River Lea. Walton was forced out of London during the English Civil War and returned to the pastoral beauty of his homeland in Derbyshire and the beautiful River Dove in the Peak District.

Chapter 4 – James visits the “fishing temple” on the River Dove, which Charles Cotton (considered the father of modern fly-fishing) built in honor of his friend Izaak Walton.

Chapter 5 – James fishes with Sir John Swire, an upper-class Englishman who talks about his love of fishing and of Izaak Walton’s ideals and life philosophy.

Chapter 6 – James visits Victoria Wakefield who helped him secure fishing on the renowned chalk streams, the Test and Itchen in Hampshire. She introduces him to Roger Harrison, who owns a beautiful stretch of water on the Itchen with lots of wild trout. There, James encounters a milkmaiden.

Final Chapter – James visits Izaak Walton’s grave in a chapel in Winchester Cathedral, and discusses the last years of his life. Then he sings a song in a meadow by the river and returns to the fishing at the pond near his home in Connecticut.